The John B. Aird Gallery is not accepting submissions at this time.

Thank you for your interest. 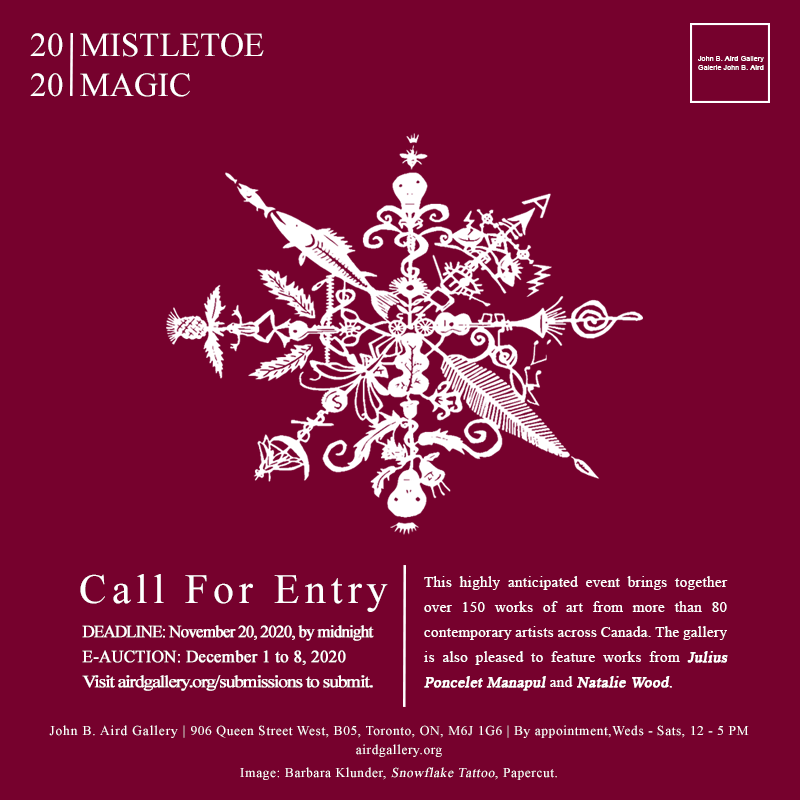 The John B. Aird Gallery is delighted to present its 35th edition of Mistletoe Magic. Traditionally a silent art auction, this year’s auction will be held online as an e-Auction on 32Auction.com. Each year, Mistletoe Magic raises much-needed funds for the Aird Gallery’s year-round programming, which includes 10 to 12 exhibitions per year, support for participating artists and organizations, and increases the gallery’s visibility while remaining free of charge to the public.

Bringing together over 150 works of art from more than 80 contemporary artists across Canada with featured artists Julius Poncelet Manapul and Natalie Wood, who’s works and contribution to the arts is known locally and internationally.

Mistletoe Magic 2020 will mark the second edition of this popular e-auction. Crucially, the funds raised will support the Aird as we continue to program exciting contemporary art in the initial Artscape building in Toronto.

Born in Manila, Philippines in 1980, Julius is a migrant Filipinx artist from the Ilocano tribe, with Spanish heritage and Cherokee ancestry from the Southeastern Woodlands of the United States; a descendant of Maria Josefa Gabriela Carino de Silang, known as an anti-colonial fighter during the 18th century Spanish rule over the Philippines—the first female leader of a Filipino movement for independence from Spain. This background informs Julius’ research and artistic practice, as they excavate the experience of immigration and assimilation through cultural erasure.

Manapul attained a BFA at OCAD U in 2009, Professional Art Studio certificate from TSA in 2011, Masters of Visual Studies at UofT in 2013, Sexual Diversity Studies certificate at UofT in 2013. Presented at The Paradise Now Collective (2011), Nuit Blanche-Toronto (2010, 2012 and 2014), Toronto World Pride Affiliated Art Event (2014), performed at the AGO (2017), shown works at Koffler Gallery, A Space Gallery, UTAC Gallery, UWAG Gallery, John B. Aird Gallery, Propeller Gallery, PM Gallery, Daniel Spectrum as well as UK, France, Germany and US.

Born in Trinidad, Wood is a PhD student in the Faculty of Environmental Studies at York University she has an MA in Art Education from the University of Toronto and has completed a variety of studio courses at OCAD. Her work includes the use of recyclable materials, drawing and painting, encaustic wax, printmaking, video, performance and web-based art.