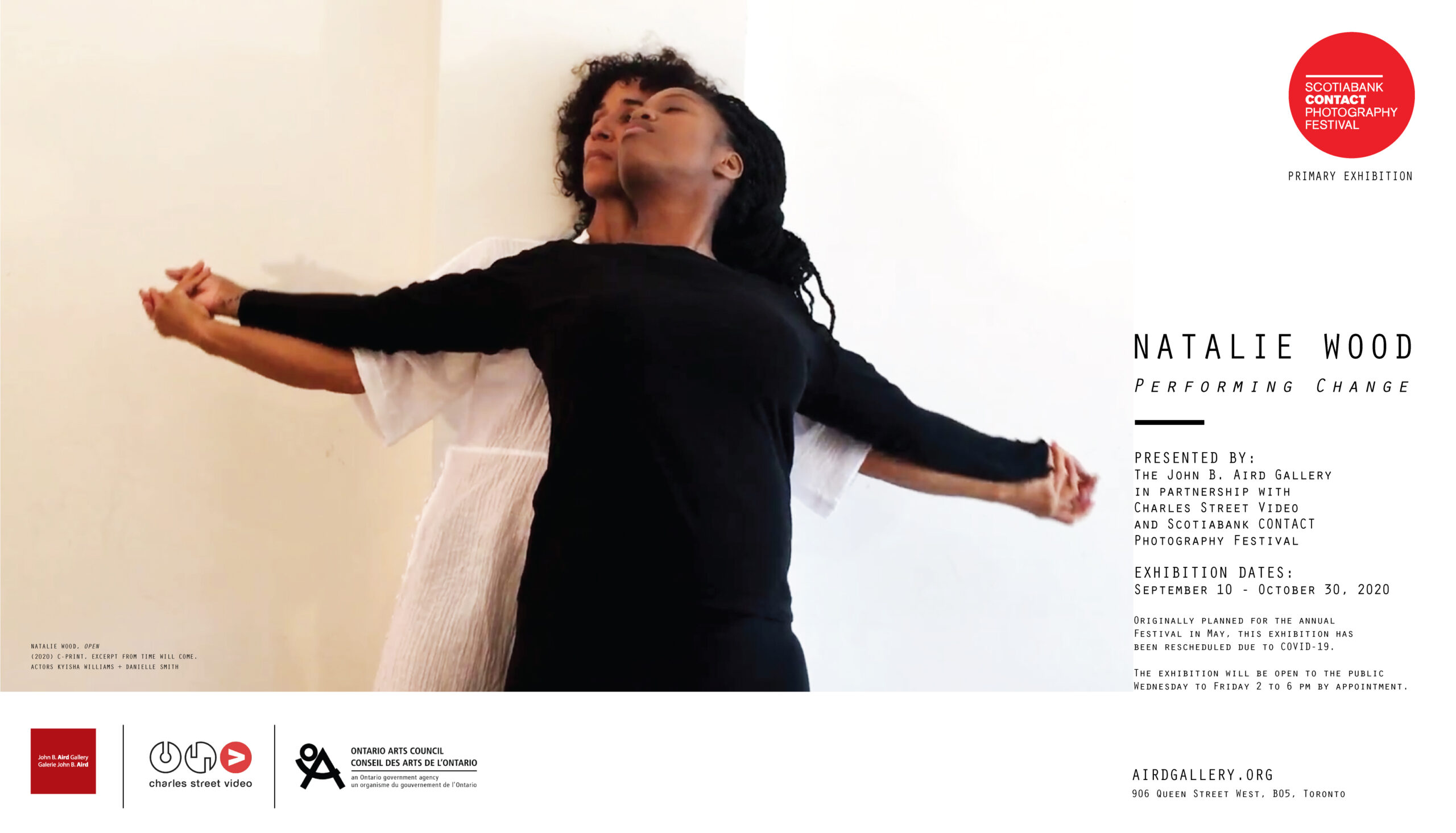 Performing Change is a survey of lens-based work, participatory performance, and installations made over the last decade by Trinidadian-born, Toronto-based artist Natalie Wood. Positioned across two venues, Wood’s work reflects on the fugitive and the imaginary as forms of resistance to colonialism and slavery’s afterlife. It counters heteronormativity by presenting rarely seen imagery showing intimacy and tenderness between Black women. Using a cinema verité approach, the artist celebrates Black women’s lives and loves.

Wood’s interdisciplinary artwork exists at the intersections of popular culture, gender, Black feminism, sexuality, and race. She weaves together queer Afro-Caribbean diasporic women’s experiences within aesthetic frameworks, reinforcing the idea that Black is beautiful and that queer love IS love. Performing identity actively and constantly produces and reproduces the self that is presented to the world—because humans absorb the ideals and expectations of the surrounding culture, living queerness necessitates performing identity as a mechanism for survival. When cultures are in opposition to one’s natural self, individuals must also perform change. This occurs once self-love takes place, which then makes it possible to resist and disrupt culturally defined normativity.

Wood’s video Time Will Come (2018) exemplifies the ways in which Black women hold each other up and arrive at self-love. It shows a relationship open to interpretation, possibly between mother and daughter, mentor and mentee, friends, or lovers—aspects of each exist in most relations between women. Viewers are given a glimpse into the domestic and working worlds that Black women inhabit and that are just now beginning to circulate in popular culture. Wood’s video is not Hollywood or The L Word, however, because her work is not a straightforward narrative. Rather, it presents a window into a secret psychological framework that is non-binary and non-traditional.

In Touched by a Soucouyant (2015), Wood explores a Caribbean myth in which, by night, a woman transforms herself into a ball of fire and sucks the blood of her victims. This video (filmed on the artist’s and actors’ mobile phones) depicts an encounter with a soucouyant. In this piece, the taboo of forbidden love is readdressed as a celebratory event.

To create Bananagram/Bakergram (2013–20), Wood brings together live performance and a video projection. She presents Josephine Baker’s dance sequence in the film Princess Tam Tam (1935) unfolding in reverse in order to create alternative narratives and engage with the pain of assimilation and misrepresentation. In the film, Baker stars as a Tunisian woman introduced into Parisian society, but in real life, Baker was an American-born French entertainer, as well as an agent of the resistance and a civil rights activist. For the Bananagram performance, Wood occupies a back-lit desk beneath the projection and writes quotes from Baker and Frantz Fanon onto bananas that are handed out to the audience, a metaphor for the “primitive” role in which Baker was cast.

Wood’s timely cinematic work theorizes and maps models of imagined and sustained cultural resistance and resilience onto new-media formats, providing viewers new tools with which to engage the social imaginary. Wood’s work is positive, offers hope, shows love, is aspirational, and as such one can describe hers as a practice that is bridge-building, or in the artist’s words: “performs change.”

NATALIE WOOD
Born in Trinidad, Natalie is a PhD student in the Faculty of Environmental Studies at York University she has an MA in Art Education from the University of Toronto and has completed a variety of studio courses at OCAD. Her work includes the use of recyclable materials, drawing and painting, encaustic wax, printmaking, video, performance and web-based art. Her videos and performances have been presented in venues such as L Space Humber, OCAD Gallery, Inside Out Film Festival 2015, Nuit Rose, Trinity Square video, The Caribbean Tales film festival 2014, T&T film festival 2013, New York Mix Film and Video Festival, Images Festival 2006 and Mpenzi Film and Video festival (where I won the Audience Choice Award in 2006). Her art works and collaborative art practices have been presented nationally and internationally in solo exhibitions at WARC, Zsa Zsa Gallery, Caribbean Contemporary Art Centre 7; several group exhibitions (Occupy Space 2016 @ Humber Art Gallery, TSG 2016 @ Gladstone Hotel, The Church St Mural Project 2014, Peterborough Art Gallery 2012, Prefix Institute of Contemporary Art 2007), International Art Fairs (Artist Project Toronto 2010, Nuit Blanche 2007, Toronto Alternative Art Fair International). She has received awards from the Toronto, Ontario and Canada Council for the Arts, the 2006 New Pioneers Award for contribution to the Arts in Toronto and was nominated for the 2006 K. M. Hunter Award for Interdisciplinary Arts Award for my web-based project Kinlinks. Natalie Wood is newly represented by Paul Petro Contemporary Art, Toronto.

PAMELA EDMONDS
With just over 20 years of curatorial, administrative and educational experience in various arts institutions across the country, Pamela Edmonds’ research interests focus on contemporary Canadian art and the politics of representation. Her work is informed by critical dialogues related to cross-cultural curating, encouraging the integration of cultural diversity into the study of Western art history and cultural studies. Her practice also explores the impact of Black and African diasporic cultures on the evolving geography of global contemporary art. She has maintained both an independent curatorial and institutional practice in addition to organizing arts festivals, programming video and film events, teaching, and has served on numerous juries, boards and committees. Originally from Montreal, Edmonds holds a BFA in Studio Art/Art History and an MA in Art History from Concordia University. She began her curatorial career in Halifax beginning in the late 1990’s, holding programming positions at the Anna Leonowens Gallery (Nova Scotia College of Art and Design University), the Art Gallery of Nova Scotia, Dalhousie Art Gallery, Mount Saint Vincent University Art Gallery and the Centre for Arts Tapes to name a few. She has also held curatorial positions at A Space Gallery, the Art Gallery of Peterborough, and most recently at the Thames Art Gallery in Chatham, where she served as the Curator/ Director. Edmonds has been an advocate for inclusive curatorial practices and cultural equity throughout her career, which is evidenced by her work with numerous collectives and grassroots organizations including Third Space Art Projects, a curatorial collective focused on program development from a intercultural perspective, and most recently with the We Curate, We Critique Collective, a mentorship and networking initiative for Black Canadian writers and curators. She was also on the organizing committee for the inaugural Black Curators Forum held in Toronto in 2019 with Dominique Fontaine, Curator and Founding Director of Aposteriori; Gaëtane Verna, Director, The Power Plant Contemporary Art Gallery and Julie Crooks, Associate Curator, Art Gallery of Ontario. This national networking and professional development initiative was aimed at consolidating intergenerational alliances, professional development and networking and in finding ways to combat the systemic erasure and historical amnesia of Black Canadian cultural producers and their work within the country. Recent exhibitions include: it is from here that the world unfolds, McMaster Museum of Art (Hamilton ON, 2019); What Motivates Her? Madelyne Beckles and Allyson Mitchell (Thames Art Gallery, Chatham ON, 2019); Outside These Walls: Yannick Anton and David Zapparoli (Carleton University Art Gallery, Ottawa ON, 2017); NEW-FOUNDLANDS: Exploring the links between Newfoundland and the Caribbean (Eastern Edge Gallery, St. John’s NL, 2016); Liminal: Jerome Havre and Lucie Chan (Robert McLaughlin Gallery, Oshawa ON, 2016). Edmonds is currently based in Hamilton and holds the position of Senior Curator at the McMaster Museum of Art.

CARLA GARNET
Carla Garnet is the Director and Curator of the John B. Aird Gallery and the JOUEZ curator for the annual BIG on Bloor Festival of Arts and Culture in Toronto. She has worked as the curator at the Art Gallery of Peterborough (2010-2013), as a guest curator at Gallery Stratford (2009-2010), as an independent curator (1997-2010), and was the founder and director of Garnet Press Gallery (1984-97). Garnet holds an Associate Diploma from the Ontario College of Art and Design and a Masters Degree in Art History from York University. Garnet is interested in the politics of the art exhibition and its potential to function as a  common—a public space for dialogue. Her curatorial area of interest engages with an exploration of work that presents the possibility of existing simultaneously in many tenses or occupying more than one subject position at once, or both as a way to open up space for greater empathy. For Garnet, an artwork’s significance is tied up with an ability to say what otherwise might be unsayable.

JOWENNE CARPO HERRERA
Jowenne Carpo Herrera is a visual artist and designer who works with various media integrating painting, drawing, illustration, photography and typography. Many of his works depict subjects drawn from nature and daily urban landscapes – experimenting with the dualities and tensions between identities, societies and idealisms. He thrives in the diversity of thought – inspired by the many things he sees, feels and experiences everyday. He is a Registered Graphic Designer of Ontario (RGD) and Certification Portfolio Evaluator for the association. He owns ABAKADA design + communication, and for over 20 years has been delivering creative design solutions across public, private and not for profit sectors – specializing in brand development, editorial design and graphic illustration. He is a champion of the art and design profession and the value it brings to the broader social and economic sectors. For over 10 years, he served as Chair/President and Director of the John B. Aird Gallery in Toronto, showcasing over 12 exhibitions annually that are free to the public. In his spare time, he abandons the digital world and gardens, cooks and runs a lot.

YANIYA LEE
Yaniya Lee is a Toronto-based writer and editor interested in the ethics of aesthetics. She works as features editor at Canadian Art magazine and teaches Art Criticism at the University of Toronto. She was a founding collective member of MICE Magazine and is a member of the EMILIA-AMALIA feminist working  group. Lee is the 2019-2020 Researcher-in-Residenc at Vtape, for which she organized the Fractured Horizon video program and wrote the essay “Glitch and Figure: representation and refusal in the videos of Buseje Bailey and ariella tai.” With curator Denise Ryner, Lee guest-edited Chroma, the fall 2020 issue of Canadian Art magazine, focused entirely on Black arts practices in Canada. She teaches Art Criticism at the University of Toronto.