This solo show reflects the artist’s desire to disrupt static and globalized notions of queerness in favor of an emergent subjectivity that is remade through aesthetics. His artistic practice focuses on the hybrid nature of Filipinx culture after colonialism and the colour-gaze of queer identities, using a taxonomy to excavate the experience of immigration and assimilation in the face of cultural erasure.
With Decolonizing Antiquities & Rituals Julius turns his attention towards the re-interpretation of colonial antiquities and their impact on ritual experiences. The project juxtaposes three bodies of work: Balikbayan Bakla, After Jose Honorato Lozano; Cup of Rice; and a table setting installation titled Kamayan na (which translates as To eat with our hands).

In Kamayan na colonial dinnerware is filtered through the artist’s decolonial reading of the ritual through the insertion of Filipino narratives and rituals of eating. The installation is accompanied by digital animations that interrogate the colonial tropes he responds to in the work. In this exhibition, the artist addresses what he describes as, ‘an eternal sense of displacement experienced as a result of the impact of Spanish Imperialism on queer Filipinx adrift in the Western hegemonic framework’. 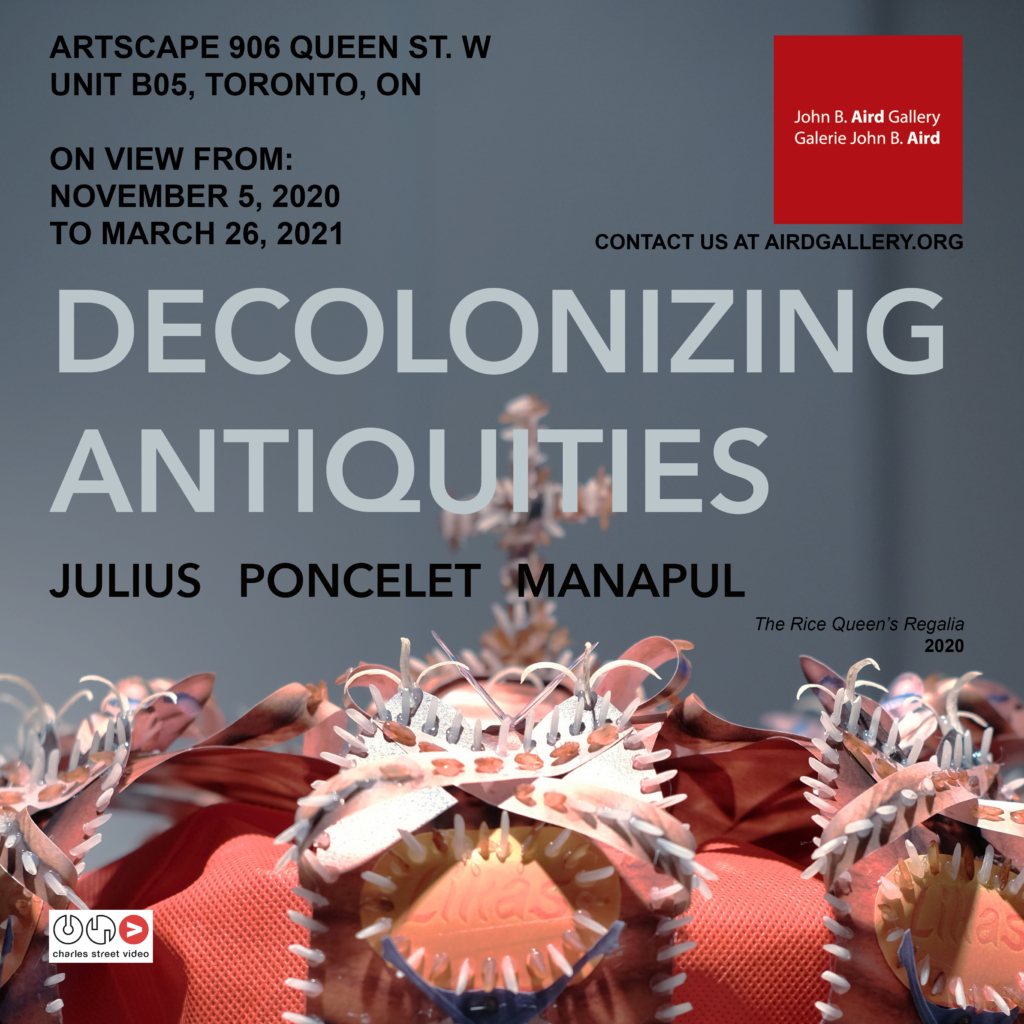 These multi-layered collage pieces contain hidden inscriptions of Tagolog pejoratives for homosexuality, effeminacy, and related performances and English racialized and sexualized slurs. Manapul reclaims these terms to disrupt static and globalized notions of queerness in favor of an emergent subjectivity that is remade through aesthetics.

Balikbayan Tea Party involves a projection, which occupies the entire back wall of the gallery. It features the artist in two to die for frocks and full out makeup, greeting his guests at the threshold between his spectacular video and his in situ tea party set table installation. Operating in concert this multi-media installation explores the colonial symbolism of in ‘high tea culture’ and how diasporic culture(s) in turn learn to whitewash themselves through such tea-drinking rituals, the work asks, “How much cream does one need to whiten their tea?”

What’s more, the show is filled with new media. In addition to the aforementioned narrative projection, there are 3 gif compositions that pulse and pull as they play on 3 large flat screens that share the gallery with 18th-century antiques, highly decorated, rice encrusted, bone china plates, framed prints, wall-lamps, and more.

Presented as a coherent collection, Manapul’s new bodies of work operate as a provisional site for change-making discussion and other potentialities.

Immigrated to Canada in 1990, attained a BFA at OCAD U in 2009, Professional Art Studio certificate from TSA in 2011, Masters of Visual Studies at UofT in 2013, Sexual Diversity Studies certificate at UofT in 2013. Presented at The Paradise Now Collective (2011), Nuit Blanche-Toronto (2010, 2012 and 2014), Toronto World Pride Affiliated Art Event (2014), performed at the AGO (2017), shown works at Koffler Gallery, A Space Gallery, UTAC Gallery, UWAG Gallery, John B. Aird Gallery, Proppeller Gallery, PM Gallery, Daniel Spectrum as well as UK, France, Germany and US. An Associate Chair of Contemporary Drawing & Painting 2019-2022 at OCAD U. A Professor in Faculty Of Arts at OCAD U.

Born in Manila, Philippines in 1980, Julius is a migrant Filipinx artist from the Ilocano tribe; a descendant of Maria Josefa Gabriela Carino de Silang from the artists father’s mother side (the Carino family tree). Maria is known as an anti-colonial fighter during the 18th century Spanish rule over the Philippines—the first female leader of a Filipino movement for independence from Spain. This background informs Julius’ research and artistic practice, as they excavate the experience of immigration and assimilation through cultural erasure. The artist explore more of these Filipinx histories in his 2020-2021 solo show “Decolonizing Antiquities” at the John B. Aird Gallery.

Addressing eternal displacement through themes of colonialism, sexual identity, diasporic bodies, global identity construction, and the Eurocentric Western hegemony, Julius’ artwork focuses on the hybrid nature of Filipinx culture after colonialism and the gaze of queer identities as taxonomy. Their recent research project looks at the narratives for many diasporic queer bodies that create an unattainable imagined space of lost countries and domestic belongings through colonial pedagogy of knowledge and globalized imperial power. Hybrid images question the problematic side of queer communities that uphold homonormativity through whitewashing and internalized racism and act to challenge forms of oppression.

Due to recent updates regarding Ontario’s lockdown, this exhibition has been extended and made available online. An essay by Robert Diaz will follow at a later date. Further announcements will be made on Facebook and Instagram.