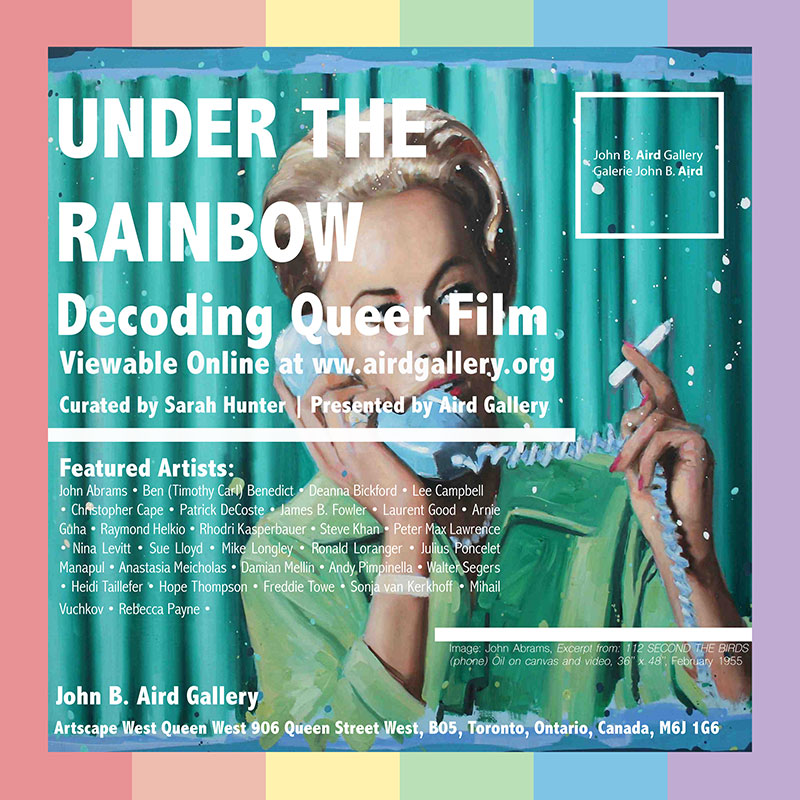 This year the John B. Aird Gallery is celebrating Toronto PRIDE with an online slideshow accompanied by a playlist and PDF publication showcasing art by contemporary artists inspired by film with queer content, a queer film-maker or a queer actor, curated by Sarah Hunter.

Sarah writes, “Film has often been used as a code for queer issues especially before it was possible to be safely out and dealing with queer topics. A good example is the character Mrs. Danvers from Rebecca by Hitchcock. It is clear by some of the veiled inferences that Mrs. Danvers was in love with Rebecca in the story. You can use new contemporary movies, actors or directors to draw from or explore older films, directors, and actors that were closeted or hiding queer themes within their work”.

Sarah Hunter has been a practicing visual artist since the late 1980’s. She has shown extensively in Toronto and Ontario in group and solo shows and has shown her work outside of Canada in the United States and Taipei, Taiwan. Her work is expressionistic in nature and explores three distinct areas, Portraits, Animal Imagery, and Mixed Media Paintings.

Sarah grew up in Toronto and completed her grade 12 at Woodstock International School in Uttarkand, India and did an undergraduate degree in Fine Arts at Sarah Lawrence College in New York. She returned to Toronto to do graduate work at U of T in Arts Education.

Sarah curated ALL ABOUT QUEER FILM in 2014 as part of World Pride in Toronto. She has been included in numerous group shows in Toronto and has also had her work showcased in exhibitions in Hamilton, Montreal and Ottawa. She was recently included in a group show of the Christie Pits Artists Collective in Toronto.