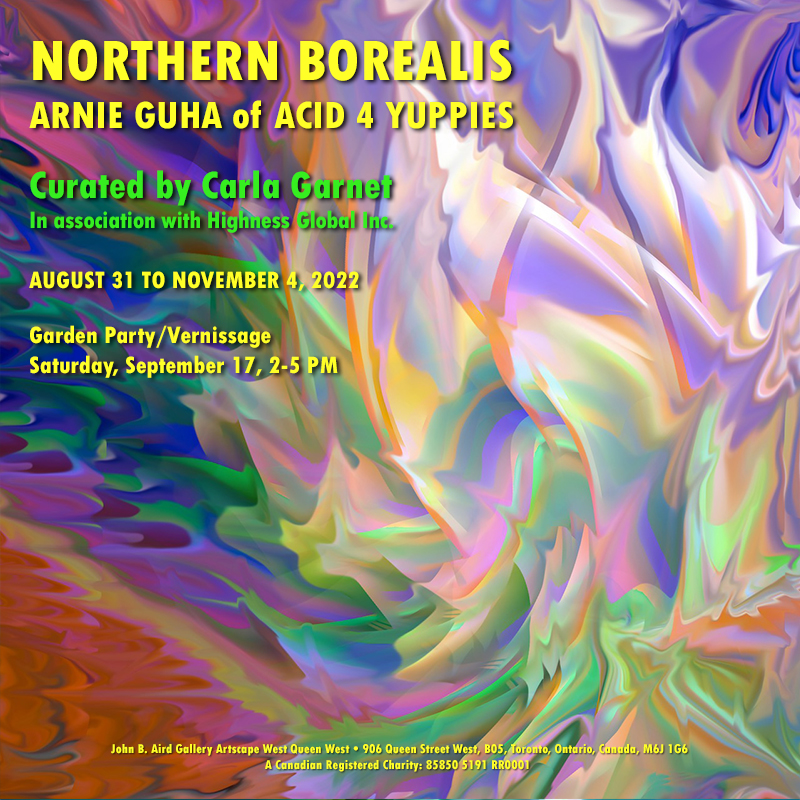 Northern Borealis is a solo exhibition by Toronto-based artist, Arnie Guha (the creative behind Acid4Yuppies) presented by the John B. Aird Gallery in association with Highness Global Inc. The show opens to the public on Thursday, August 31, 2022, and will stay on view until November 4, 2022, with a Garden Party/Vernissage to be held on Saturday, September 17, 2022, from 2 pm to 5 pm.

The artist describes his artistic process as a sort of unraveling of many assumptions and frameworks that started​ with an experiment in the willing suspension of disbelief. This allows him to indulge an alternate narrative that invites us to reconsider how we perceive our environments and examine how these perceptions are aligned with our states of mind and ultimately, our mental health. Here the works can take on a double meaning – symbolic of both our external physical world and internal “mindscapes.”

Guha’s practice is involved with altering perceptions, thus producing unexpected visual offerings with his masterful use of photography, and editing techniques. While the artist references the psychedelic art movement of the 1960s, the rave culture of the 1990s, and the induction of psychedelics into society, Guha’s visual language is grounded in the use of current-day technologies and digital media. It is in this space that Guha brings our current climate of “micro-dosed” aesthetics to the forefront.

In his piece, BIRCH HILL BOREALIS, Guha presents a monumental tree that moves from a muted tonal scale at the bottom to vibrant, saturated colours at the top. This calculated use of colour and subject demonstrates the transformative powers of the entheogenic experience – where the once ignored or mundane morphs into a spectacle of beauty. In SHAKTI (the principle of divine energy), Guha removes almost all elements of the physical world and leans into abstraction and rapturous insight. The electric colours and energetic composition become a vision that precedes an epiphany, fulfilling the psychedelic promise.

Guha’s Northern Borealis exhibition pulls from the Canadian landscape to usher in a new wave of seeing to explore the role of entheogens in corroding the tired and traumatized grooves of our thinking. Guha describes this process as “creative unlearning” and promotes the advancements of psychedelic therapies and the tremendous potential that this modality has for addressing and ensuring mental wellbeing. The title of the show is an homage to Canada’s pioneering role in the field of psychedelic medicine during the 1950s, which has enabled and informed the current resurgence of its application in the mental health field.

Science tells us the northern lights are caused by particles — electrons and protons — blasting out from the sun in all directions and colliding with the Earth’s atmosphere – but viewed by the human eye, the aurora borealis is phenomenal to experience. Analogously, the artist’s light-saturated Northern Borealis project displays spectacular vision, one that looks up and out, as opposed to one that looks in.

The exhibit will be accompanied by a downloadable publication designed by Aird Gallery assistant curator, Marli Davis with short response texts by Davis, Garnet, and Guha.

Arnie Guha is the multidisciplinary creative behind Acid4Yuppies, which focuses on experiential art works – from illuminated light boxes and electric murals, to psychedelics-inspired scarves and fine art prints. Guha’s ‘trippy’ works are complemented by an extensive body of minimalistic photographs and portraiture. From vivid colours to subdued hues, Guha’s practice explores both realms of the visual experience from extreme intensity to soft suggestion.

Born and raised in Jadavpur, a fabled neighbourhood at the southern edge of Calcutta, India, Arnie spent much of his childhood in neighbourhood printing shops, and at the local portrait photographer’s studio, where he became fascinated by the intersection of painting and photography as he watched the photo-artist manually touch up pictures with brush and pencil.

Educated at Jadavpur University, Calcutta, and then at Cambridge University, UK, Arnie fell in love with medieval manuscripts – the unapologetic vibrance of the colours and the power of the image to communicate what remains ineffable in the verbal realm. This would later inform his doctoral work on secondary orality and information visualization in digital, hypertextual environments at the University of British Columbia.

Since then, Arnie has built a leading Canadian Experience Design practice at Phase 5 (www.phase-5.com), where his clients include the London Stock Exchange Group, Thomson Reuters, media companies and several of Canada’s largest banks. When COVID-19 put a halt to travelling, Arnie found himself meditating in his garden in downtown Toronto. Acid4Yuppies is his collection of transformative art, born out of meditation during the forced stillness of COVID-19.

Arnie splits his time between Toronto and Montreal and enjoys collaborating with DJs and other visual artists to create experiential, accessible art.